When you look at Vincent Odon’s “works”, with their arresting unity, this question looms up: “But what is it all about?” A  matter of status, a question of meaning, and a problem of form. Having smiled, what remains in us from having passed through these discreet pages where – like so many interjections – he jots down his observations?

The art grammarian will have to wonder, so let us follow him and, first and foremost, set about the task of establishing  a typology of the way his images function, the linchpin being language—nor forgetting to provide meaning to the places where Vincent Odon wants his images to appear: in the art arena.

But Vincent Odon is suspicious of words. He talks sotto voce, and seems to have an attitude of near indifference to things of the world. His stance is definitely not cynical and his mainspring is not irony. By overlaying two chords of meaning, he creates a wit-friendly discrepancy, which operates like a wake-up call, the outline of a rebellion. But nothing, where Vincent Odon is concerned, it said in too loud a voice. His drawing, which has no effects of style, seems almost self-effacing, demure and discreet to the point where we might wonder if he is not raising the issue of form by turning his back on it.

Might Vincent Odon be playing at being postmodern, subscribing to disenchantment rather than to the critical outburst? These graphic cameos might have to do with the history of the press feature, reinterpreting forgotten classics of the witty cartoon, but let us first look at them by the yardstick of Kossuth, who rigorously drew up a perfect equivalence between: an object, its image, and its definition (the word designating it), and thus claimed to be doing away with the boundaries between meaning, sign, and thing, and showing that place where Art is. What is more, in the face of semiologists and philosophers, such an “aberration” – as they say in optics – could only be uttered in the field of art and everything-is-possible. This is tantamount to saying, in relation to Vincent Odon’s work, that what is involved, all at once, is exactly what you see, as well as a stance which establishes the image as a place of thought superior to mere aesthetics, and opening up this latter’s prospects.

As  early as in 1848, J.J. Grandville dismantled and for the first time revealed the way the mechanics of idea association operates in waking dreams, not only by way of a text, but through two edifying conceptual drawings, where words and shapes are dovetailed and sequential. This is the supremacy of the word (the divine logos that is the foundation stone of all forms of monotheism) which is challenged, language thus seeming to be no more than a stage in the history of humanity’s intelligence. A tool for representing the world, but one that can be disputed by other representations. And for example, through contemporary art, it is a matter of inventing new and more complex glyphs – kinds of riddles and thingamajigs – which make us smile today, but when it makes thought stumble, it re-invents it.

Vincent Odon incorporates his research in the tradition of a “minor art” (in the sense whereby Gilles Deleuze talks about a “minor language” where it is a matter of “stammering the language itself, being like a foreigner in your own tongue”). We mentioned Grandville, never given  his due by the standard-bearers of great art, but a man who remembered Jules Lévy, who, in 1882, organized an exhibition of “people who did not know how to draw”, thus giving rise – running counter to official, conventional art (art pompier), counter to modern art, and actually against nothing at all – to the “Incohérents”. And what a delight, for more than ten years… An art upon which our museums still turn their backs: pictures measuring 40 feet, sculptures made of  saveloy, a real horse painted red, white and blue, a rabbit living in a picture, unlikely machines, and puns to suit different tastes. “Readymades” ahead of their time like the mirror titled Portrait of Everyone, and, needless to add,  the famous monochromes – the white one: Young Nude Dodderer on a Snow Field [Jeune cacochyme nue sur un champ de neige]; the red one: “Apoplectic Cardinals Picking Tomatoes by the Red Sea [Récolte de tomates au bord de la Mer Rouge par les cardinaux apoplectiques”, by Alphone Allais, who is acknowledged for his writings… But who remembers Bridet (1859-1886), whose famous “Porc trait par Van Dick” is of less import than these evocations of “Mouvementisme”, satyr of an art which, by forever going forward, might be summed up by his cumbersome army boots… The Dada artists recognized what they owed him, as did the Surrealists, whose “international exhibitions” were meant to look like the “Salon international des incohérents”, which—what a coincidence!—was held on the Boulevard Bonne Nouvelle in the same building that Breton’s beloved Jacqueline Lamba lived in.

As we trace these links back,  we find ourselves in the environs of Michel Laclos and Erik Losfeld who, in 1953, founded the magazine “Bizarre”, and produced some fifty issues, positing the spirit of a French-style “nonsense”, and in their vicinity Bosc and Chaval, both classics in their own way, and Gourmelin, whom the Centre Pompidou paid tribute to in 2009, whose heady spaces, to borrow the words of Philippe Soupault, co-author of the Surrealist manifesto, are “a resurrection of reality”. And then it was Panique, Topor, Zeimert and their gang, who were more politicized… Because wit is the perfect mask for protesting against dogmas, and if we are to believe the philologists, the notion of wit and humour made its appearance in England in the mid-18th century… But fast! In that selfsame period when Freemasonry came into being… as if laughter and a new form of theosophical thinking shared in common a desire to dispossess the master of coincidences – God in person.

Faced with the mysteries of the world, man finds himself in the uncertainty of the sequence of causes and effects; in the ordeal of his freedom, words and emotions equivalate to things. Because he – Vincent Odon – is an artist, he can establish between everything he conceives, thinks and feels what we might call “Co-incidences”. The unlikely encounter, nice or nasty, of what was not made to “incide”: it produces situational monsters. The relevance if his “co-incidences” goes back to his student works, his quest for nonsense forces him to toil.  As much as his ideas jotted down in notebooks seem aimed just at concepts, and seem to express what he thinks as best they can, his works, in terms of volume, impose as much, because they make the tangible improbable, and they turn wit into a catastrophe. When he rails against something – but always with the volume well turned down – he is talking about space. About partitioning and circulations, shifts from a word to a thing, lending visibility to the mental images which enable him to keep a diary of his position in the world. 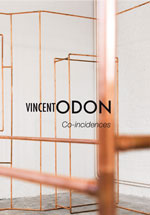